Britney Spears opens up about her children’s decision not to visit her: “They’re being too tough” 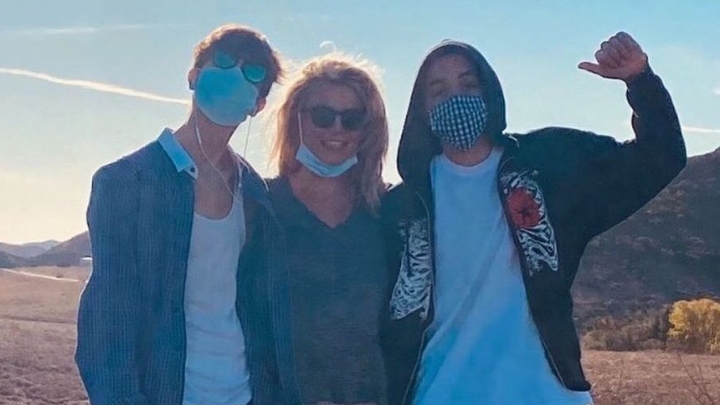 Britney Spears spoke again about the statements of her ex-husband, Kevin Federline, who said in an interview that her two sons, Sean Preston, 16, and Jayden James, 15, do not want to see her at the moment. Federline revealed that it has been months since the boys last saw her and that one of the reasons for this distance would be related to the nude photos that Britney posts on her social networks.

The Princess of Pop, who had already spoken about the interview on her social networks, defined it as “painful”, returned to vent on her Instagram, in a post already deleted, in which she criticized the statements of her ex-husband, stating that the situation should have been dealt with privately between them, and talking about their children’s distant behavior even when they were under guardianship.

Read the translated publication in full:

Just another day here in my lovely new neighborhood! Honestly, it’s really cool, I take my dogs to a playground and see how incredibly smart my puppies are! They really feel like we’re in a new place in the park and they love it! Daisy literally runs with her mouth open, but the little white furball tried to escape the first time, I’ll stick around! I haven’t shown my house yet because it’s hard to fully accept it! Yes, she is beautiful, but I miss my other house for some reason!

It’s hard for me to let go of the things I really love… like my kids. The situation should have been 100% handled privately and definitely not online! A British broadcaster stated that their stepmother’s goal is to keep the children away from all the controversy and trauma of my home… I have love in my home and I have the blessing of the people I allow in and out of my home!

I looked forward to seeing my kids every week… It was 2 days a week, but I asked them to stay more days… Maybe 3 days… But then, the following week, they stayed for just one day. Yes, I know it’s hard to deal with teenagers at that age… but wait a minute, being rude is different from being hateful… they would visit me, walk through the door, go straight to the bedroom and lock the door! The monitor told me that he [meu filho] I just liked to stay in his room… I thought about why they came to visit me when they didn’t even visit me! But I never said that because I have to be kind.

REMEMBER… if I spoke like a woman or said something argumentative, like I did with a dance move when saying no, I was sent to that place [clínica] for 4 months! So would I dare to speak up and air my thoughts like a real woman and possibly offend the person in front of me? No… I could take it and keep my mouth shut! It registered right in the center of my stomach… it hurts and I wanted to scream! I wanted to shake their shoulders [meus filhos] and say ‘wake up, I’m here too!’

Adolescence is strange, I don’t know what goes on in their heads! We always had prayer time, it wasn’t really a prayer time, that sounds silly, but it was called ‘devotion’…where you read two or three pages in a prayer book and talk about them! I always TRIED and TRIED, and maybe that’s why they stopped coming here! I wanted them to love me so much that I may have overdone it!

This summer they told me ‘I think we’ll come here less’ and I thought, okay. I called their dad and said the boys seemed to be wanting to stop coming here so much, which I understand because they have their own thing going on, but I feel like they’re being too tough! his words [Federline] were ‘I would never let them make this decision on their own… I would never do that to you’! Well after that, I haven’t seen them since!

But I will say that as much as I was available for 8 people a day when my dad took me out of the house for 4 months, it’s been nice not having to ask what day the boys are coming this week, making me wait 2 or 3 days for an answer! But then again, it’s just another way for my family to make me feel like an absolute nothing! ‘Well, we’ll let you know, mother. When can we see you.’

So no matter how much you watch what he calls the perfect family like in a butter commercial… I can assure you, this house has more weed than Ludacris, 50 cent, Jay Z and Puff Daddy combined! He wants to bring up my past from when I was bald and go back to that difficult time in my life! That was almost 20 years ago… their game no longer works!

In those years of tutelage, I had to become a fucking saint with the pain I had to endure keeping my mouth shut while they literally took my femininity from me! I made up for past mistakes and MORE in that time! My sister does this… she talks at her house and corrects people! But why was it that whenever I did that it was considered a THREAT? Oh shit… he might get involved in this… but if he did, he’d say SIT DOWN, we need to talk… the first thing was ALWAYS, ‘nobody likes you’… and the rest, I guess that was about anything I said. It was basically, ‘how dare you say something to offend others and make them THINK they should change’!

Anyway, I know it’s all written down, but you know what, I talk about it because my heart doesn’t understand cruelty. It breaks my heart because it seems to me that cruelty does win these days, even though it’s not about winning or losing! But I can’t process how I’ve dedicated 20 years of my life to these boys… it was all about them! For them to finish me off… see, you can’t fix me! No therapy or sense of worship can mend my heart! I will be traumatized forever and I know this, I accepted it… it would take a miracle to mend my heart… not just one miracle, but maybe 3! Anyway, I have a beautiful pool, a supportive husband and 5 dogs… Okay, I’m a lot, but that’s how I love it… have a nice day!