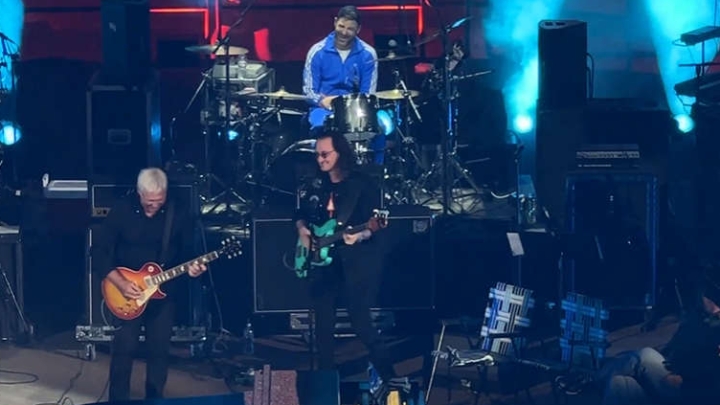 Alex Lifeson and Geddy Lee, the two remaining members of Rush, took the stage last night (10) to remember “Closer To The Heart”, one of the great classics of the band that fell apart in January 2020, with the death of the drummer. Neil Peart. The surprise appearance took place during one of the two concerts made to celebrate the 25th anniversary of “South Park”.

The mythological amphitheater of Red Rocks located in Colorado, USA, where the fictional city that gives name to the animated series is located, was the chosen stage for the celebration. The concerts were attended by Primus, who composed the tremolo music for the show, and Ween, who also have a long relationship with the show, in addition to, of course, the creators of Kenny, Cartman and co.: Trey Parker and Matt Stone. , who are still in charge of the animation and are also musicians.

The presence of Lee and Lifeson surprised not only the audience but Matt himself, the birthday boy of the day, and a longtime fan of the Canadian trio. On their current tour, Primus is playing the entirety of the album “A Farewell To The Kings”, in honor of Rush. So they suggested adding “Closer To The Heart” to the show’s repertoire and forcing Stone to learn to play the song made perfect sense.

Obviously, those involved in the show knew something else was in the works for the night, but from Stone’s reaction, everyone managed to keep the cartoonist oblivious to it.

Watch (the full performance can be seen here):

…. and to close, Les Claypool singing “Closer to South Park” while his heroes dele sang one of the greatest Rush songs was just perfect ??? pic.twitter.com/wcox6qXuCV

Previous Post
‘A League of Their Own’, a reboot of the classic ‘A Very Special Team’, is RATED by critics; Check out!
Next Post
Genshin Impact: Characters are recreated in Tower of Fantasy; Look